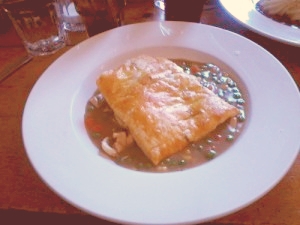 Kristen and I, and my sister, brother in law and niece all went to Murphy’s Bistro and TavernÂ in High Falls, NY, the restaurant which replaced the Northern Spy Cafe.

The staff was friendly and the food was amazing! I ordered the Chicken Pot Pie which was delicious. The crust on top was light and flaky, the chicken was tender and the gravy was to die for! Kristen had the burger which came with potato wedges. I sampled both, the wedges were awesome and the burger melts in your mouth. My brother in law had the Shepherd’s Pie which he said was the best he ever had.

For dessert, I had the Bailey’s Cheesecake, Kristen had the Chocolate Mousse, and my sister had the Flourless Chocolate Torte. I sampled all of them, and each one was amazing. The mousse and the torte were both deliciously chocolatey and the cheesecake was rich and creamy.

I will definitely be going back, the hard part is going to be choosing between the Shepherd’s pie, the Pot Pie of the Day, the Philly Cheese Steak Panini or…. Obviously I’ll be going back a lot.