This the kind of meal that comes about by scouring the refrigerator and cupboards to see what you can use! We had leftover cooked chicken, lots of fresh green onions, cheese, burrito shells, etc., so we went for the Chicken Enchilada option.

I made a cheese sauce with extra sharp cheese, and mixed that into the shredded chicken and chopped green onions and other spices for the filling. (So, technically, that makes this NOT an enchilada since we had no green chilis, but the spirit is there!) Then, we rolled it into burrito shells, topped with canned enchilada sauce (Ahhh, THERE’S the enchiladas! Nevermind what I said before!), and lots of shredded cheese, and then baked the whole thing for 45-55 minutes or so.

This is the result, served with a side of refried beans, which we found in the cupboard at the last minute and mixed with salsa for extra kick: 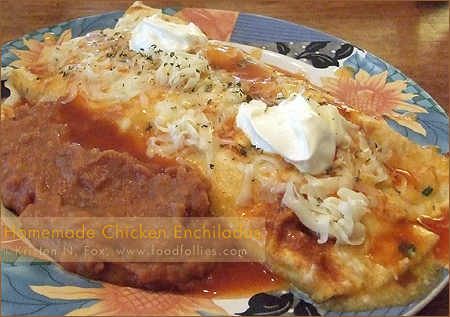 They were fantastically tasty, seen here topped with sour cream. I think we drank Lime Seltzers with the meal, which went really well. I love it when a plan comes together. 🙂

Here in the northern hemisphere, we’re edging into the kind of weather that’s great for meals like roasts, casseroles, and, yes, loaded baked potatoes! This one has sharp white cheddar cheese, bacon, and chopped green onions… 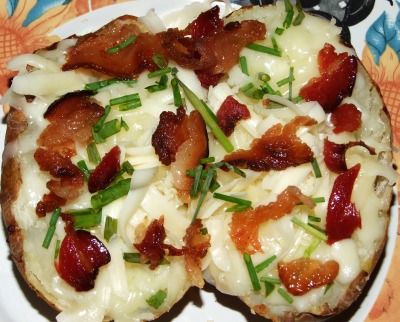 Other topping ideas include… diced tomatoes, parmesan cheese, broccoli, and probably a lot of other leftover things you have in your refrigerator. We usually eat loaded baked potatoes as a main dish, since eating them WITH other food seems like WAY too much to eat at one sitting, but your mileage may vary of course.

I made lasagna over the holidays, including homemade lasagna noodles. I’ve made them a number of times, but have never let the fresh lasagna noodles dry flat on the table (on paper towels) overnight before. When I saw them in the morning I started laughing….

Apparently, they dried on the top, open to the air, much faster than on the bottom, or at least started that way and once they were mostly elevated off the paper towels continued to dry in arcs. They seemed a little more brittle to the touch than noodles that were only dried for a little while, but they cooked up just fine in the hot water. Anyway, I just couldn’t resist sharing this image. Silly dried pasta!

John made a fantastically delicious Quiche Florentine the other day – it’s lucky I took a photo before we started eating it because it didn’t last long!

He made a homemade crust, and then, to the best of his recollection, the quiche was a mixture of 5 or 6 eggs, a carmelized onion, chopped spinach, sharp and monterey jack cheese, tiny chopped pieces of about half of a small ham steak, parsley, a bit of milk, and maybe a little pepper. Sorry we can’t give any specific measurements, but he just eyeballed most of it when he was putting it all together. He does remember baking it for 45 minutes at 350 though -LOL! (Toothpick method for determining doneness works well since mostly you have to make sure the eggs are set.)

I enjoy a good chicken sandwich as much as the next guy. In fact I generally won’t order grilled chicken at a restaurant because they’ve usually been on the grill for several hours and taste more like warmed over shoe leather than anything resembling meat.

The new Double Down by KFC though, while I have not tried it, quite frankly repulses me. The “sandwich” consists of two breaded chicken fillet patties in place of bread or a bun, filled with cheese, bacon and the Colonel’s sauce. I freely admit that I’m not much of a KFC fan to begin with. They use way too much MSG in their food so when I eat it I end up with an insatiable thirst, a headache and sometimes my hands break out in a rash.

This entry to me is not a sandwich though. Sandwiches start with bread and good sandwiches start with good bread. One of my favorite chicken sandwiches used to come from the old Wolf’s Deli in downtown Manhattan. It had a breaded chicken breast on a kaiser roll, with bacon and swiss cheese and barbecue sauce. Not too different from the entry above in terms of ingredients, but in my mind far more appetizing and attractive than that greasy monstrosity above.

Well, we’re on the road, on our way to our new home in Upstate NY. We haven’t had much of a chance to eat at independent restaurants along the way (a bit hard to find along interstates although occasionally we luck out), but tonight we did, when we stopped in Chesterton, Indiana! We ordered pizza from a place called Gelsosomo’s Pizzeria (the other two choices were Pizza Hut and Little Caesars) – and it’s delicious! We got a simple sausage pizza and although the round pizza was cut into a grid pattern instead of the classic slice formation, it’s still extremely tasty. It arrived hot, and in fact, I’m going to get another slice now and stop writing this post. Tah!
[Tags: food, pizza, indiana, road trip]

Some other exotic foods our previously mentioned globetrotting friend bestowed upon us involved specialties from Spain, including Spanish sausages, and breadsticks:

The sausage had a fantastic flavor and texture, the bread sticks were excellently crunchy, and the ‘nun cookies’ finished things off with a sort of fig-newtony type flair, but with a fruit that was lighter in color and taste. We ate them all like a snack, and washed them down with a bottle of fruity white wine, which complimented things well. All around it was a night of fantastic food tastery!

Every so often I remember that I love Grilled Turkey Reubens and that I haven’t had one in a LONG time!

They’re really easy to make – sliced deli turkey, lots of good saurkraut (we used Hebrew National), and a Thousand Islands dressing on your choice of rye bread – we chose a Jewish Rye. (In our area of California, the only kind of ryes available are pre-packaged, made by Orowheat, but they work just fine! Marble Rye is also good, or even a Pumpernickel, although the taste is stronger.)

So assemble the sandwich as you like, butter the outsides of the bread, and then grill until golden brown!

That’s not the most exciting picture, and you can see that it’s browned a bit unevenly, but I was in more of a hurry to EAT the sandwich than to spend time on a pretty presentation – hah! It tasted even better than it looks here, if that helps.

Take a piece of bread, layer turkey, some saurkraut, slices of cheese, and top with dressing. Complete with another slice of bread. Spread butter on outside of each bread slice and grill sandwich in a (nonstick recommended) frying pan on low heat until bread is golden brown and crispy and cheese is melted. Cut in half and serve.

We made calzones again the other day – this time stuffed with ricotta cheese, mozzarella cheese, and some fresh (pan fried) italian sausage coins – yum! If you want to play with a little yeast and dough, here’s the recipe to make your own calzones.

And this isn’t the best photo, in fact, it’s a little TOO golden, but you get the general idea: 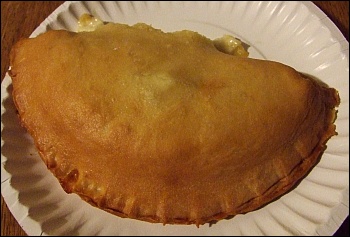 This is a really easy recipe for a very tasty sandwich! Marinate boneless chicken breasts in Italian Dressing overnight. Shake off excess dressing and grill the chicken. Open ciabatta rolls and dress with mayo, lettuce, and thinly sliced tomatoes, then chicken, then top with a slice of jalapeno jack cheese and wah-lah!

Serve with a side of potato chips or potato salad if you like.