About 12 years ago I had a piece of broiled Ahi Tuna in a restaurant and thought it was the most fantastic piece of fish I’d ever eaten. I’d forgotten about that tasteful experience for a long time until John and I found some wonderful Ahi Tuna the other day and decided to make a special meal of it. The Ahi Tuna itself came frozen in marinade, so we defrosted it in the fridge for a day. Then when it was thawed, John melted butter in a hot frying pan, and placed the tuna in it, and poured the marinade in after. The tuna was broiled to perfection – turned from fish-red to white and was nicely brown on each side, and FULL of flavor.

We also made some wild rice and basmati rice pilaf with onions and peas as a sidedish. Oh, right, after the tuna was cooked, John threw some sliced, fresh mushrooms in the frying pan, and then covered the tuna with them. 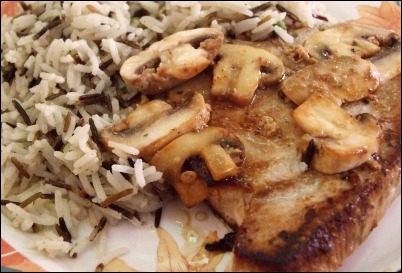 It was all completely tasty, and just a wee bit fancier than we normally make. The spices in the marinade (mostly salt and pepper, but also some red pepper) complimented the spiced in the rice pilaf nicely! (Also, if you don’t usually like fish, such as haddock or cod, but eat tuna, I’m sure you’d like Ahi Tuna.)
[Tags: fish, tuna, food, cooking, rice]